The most valuable asset the Raiders have is its Alumni. Their commitment to excellence laid the foundation for our organization’s success both on and off the field. Our Alumni continue to make us proud with their dedication to each other, the organization, and the community. To inquire about booking one of our Alumni at an upcoming charitable or corporate event, please email us at [email protected]. Once a Raider, Always a Raider!

Only service animals accompanying guests with disabilities are permitted at Allegiant Stadium.

Download the Raiders + Allegiant Stadium app to stay up to date with the latest news regarding upcoming events and gameday information. Visit here to download the app.

An exception will be made for any necessary medical items after proper inspection at entry.  Prohibited items include, but are not limited to, purses larger than a clutch bag, coolers, briefcases, backpacks, fanny packs, cinch bags, seat cushions, luggage of any kind, computer bags, and camera bags or any bag larger than the permissible size.  To learn more about the latest news regarding the bag policy, visit nfl.com/allclear. 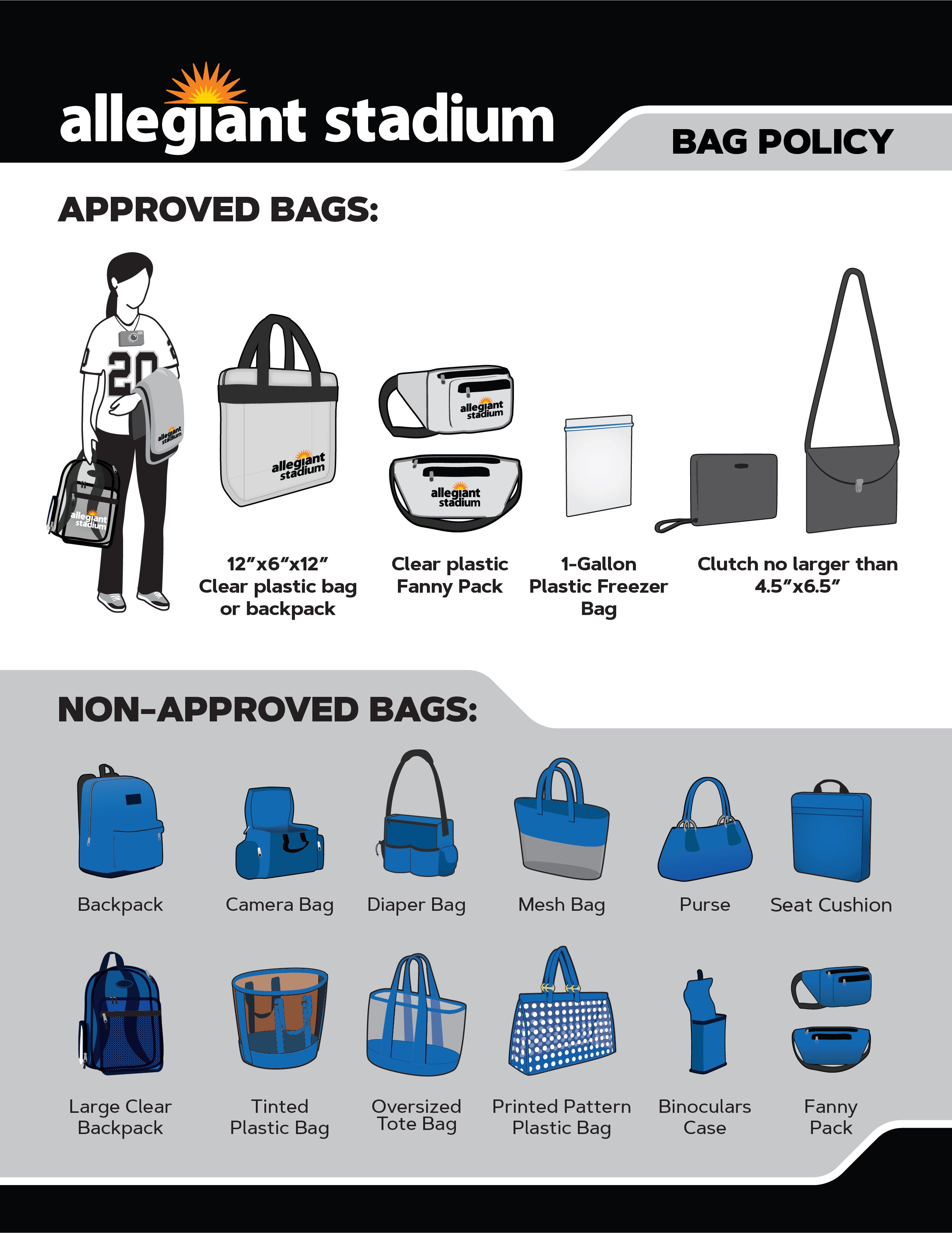 Bottles, cans, and hard-sided beverage containers of any kind are prohibited from entering Allegiant Stadium. A security screening will be conducted at the entries to prevent these items from entering the stadium.

The Ticketmaster Box Office at Allegiant Stadium is located on the Northeast corner of the stadium. To contact the Box Office, please call (725) 780-2100.

Allegiant Stadium is a cashless venue. Cash will not be accepted as a form of payment at any parking, retail, or concession locations. Guests may convert their cash to a debit card by using one of the Cash to Card kiosks located throughout the stadium. Any remaining balance on the debit card can be used at locations where debit payments are accepted.

Cash to Card kiosks are located in the following locations:

Help us create a safe and friendly environment for all guests at Allegiant Stadium!

We expect all who enter Allegiant Stadium and the surrounding parking lots to adhere to this Code. Failure to follow this Code may result in ejection from Allegiant Stadium, revocation of ticket privileges, and/or arrest. Season Ticket Members have the right to sell or transfer tickets through verified channels. Season Ticket Members transferring or selling tickets on non-verified platforms will be held responsible for the actions of those using their tickets.

The following actions are violations of the Guest Code of Conduct:

Prepaid parking passes are required in all lots, and parking spaces are available only for guests attending the event.  Tailgating ends at the start of the event.  There is no loitering or tailgating in Allegiant Stadium parking areas during or after the event.  Those participating in these activities are subject to ejection from the stadium, parking lot, revocation of event tickets, citation and/or arrest for trespassing.  All Allegiant Stadium parking lots are cleared one hour after the end of the event.

Guests that are found in violation of the Code of Conduct may be required to take a four-hour online conduct course and pay a fine in order to re-enter the stadium for future events.

All Code of Conduct violations are recorded on the account of record, regardless of the offender.  Any guest found in violation may be subject to a $250 fine and a 4-hour Code of Conduct course. Repeat offenders or accounts may result in the loss of ticket or event attendance privileges.

The Las Vegas Raiders Community Relations department strives to enrich the community through impactful programs and outreach. The department is dedicated to upholding the integrity and teamwork exemplified by the Raiders organization, both on and off the field.

Coming from the North:

Coming from the South:

Coming from the West:

Coming from the East:

The use of drones, unmanned aircraft vehicles, or any remote-controlled aircraft on Allegiant Stadium property, including parking lots is strictly prohibited. Violators may be subject to civil and criminal penalties.

Allegiant Stadium is a full-service entertainment facility with versatile indoor and outdoor spaces that is available for rent year-round for corporate and social events. For more information, please email [email protected].

Allegiant Stadium is a no re-entry facility.  Once a guest has exited the facility, their ticket will not be valid for entry again.

Fans who would like to mail letters to The Las Vegas Raiders can do so to the below address:

Please note, the Raiders are not responsible for any items that are mailed in and not returned.

The NFL utilizes flexible scheduling for games during Weeks 5-17. These games are eligible to be moved into different time slots. Season ticket holders will be notified of any changes via an e-mail from the team. Game time changes will also be posted on the team and stadium websites.

Donation and fan pack requests can be made online through the Raiders Donation Request Form. Submit a donation request or request a fan pack.

The Junior Raiderettes program offers an opportunity for children to learn and perform alongside The Raiderettes in a non-competitive and exciting environment.  Juniors, ages 6-14, with all dance and cheerleading ability, are encouraged to participate – auditions are not required! Learn more about the Junior Raiderettes Program here.

During events, any items found should be turned into the Guest Experience Headquarters located on the main concourse next to the Ford North Entry. On non-event days, please call (725) 780-2300. Lost and found items will be held for 30 days after the event. Any unclaimed items after 30 days will be disposed of or donated to a charitable organization.

The Raider Image is the OFFICIAL TEAM STORE for the Las Vegas Raiders.  The Raider Image operates 14 locations in Nevada and California, as well as the official online store for the Raiders and the flagship store at Allegiant Stadium.

The Raider Image offers the ability to Buy Online, ‘Pick Up in Store’, and ‘Pick Up in Locker’ at Allegiant Stadium.  The online store can be found at raiders.com/shop.

On gameday you will find three (3) stores and nine (9) portable locations to find just the right Raiders item to mark your visit to Allegiant Stadium.

To ensure the highest level of safety and security, all guests and their belongings will be subject to a courteous security screening upon entry.  Guests that refuse the search will not be admitted. By presenting your ticket or credential to the security staff, you are consenting to such inspections and waive any related claim that you may have against the Las Vegas Raiders, ASM Global, the City of Las Vegas, the NFL, or any of their respective affiliates or agents.

Outside Food and Beverage

All outside food and beverage are prohibited from entering Allegiant Stadium.

All patrons and items entering Allegiant Stadium are subject to search. Refusal of this search will result in non-admittance into Allegiant Stadium. Management is not responsible for items left behind at the entries or items lost, damaged, or stolen.

All patrons and items entering Allegiant Stadium are subject to search.  Refusal of any guest will result in non-admittance into Allegiant Stadium.  Management is not responsible for items left behind at the entries or items lost, damaged, or stolen.

The Raiderettes have been ambassadors for the Raiders Organization for more than 50 years. The squad is recognized world-wide, donning their traditional white boots and iconic silver and black uniform. In addition to entertaining guests at every home game, the Raiderettes work year-round in the community appearing at hundreds of charitable and corporate events per year. Learn more about the Raiderettes at their official homepage.

One of the key design elements of Allegiant Stadium are the retractable doors, also known as the Lanai Doors. These doors are located on the North side of the stadium and open to the iconic Las Vegas Strip. It takes approximately nine minutes to move the doors from open to close. The Lanai Doors will be open for select events.

In accordance with The Nevada Clean Air Indoor Act, Allegiant Stadium is a smoke-free facility. This includes the use of vaporizers and e-cigarettes. Designated smoking areas are located outside of the stadium.

For UNLV ticket sales and ticket services, please contact UNLV Tickets at unlvtickets.com or call (702) 739-FANS (3267). Rebel Football tickets will only be available at Allegiant Stadium on UNLV game days.

Tour highlights may include, The Al Davis Memorial Torch, Broadcast Booth, Private Suites and Clubs, Raiderettes Locker Room, Ray Morgan Press Room, Raiders Locker Room, and Field.  Tour routes and times are subject to change due to availability based on events and activities throughout the stadium.