We recommend booking convenient and affordable parking in advance through SpotHero, the nation's leading parking reservations app. To reserve your parking spot, visit the Allegiant Stadium SpotHero Parking Page. *Parking provided and operated by MGM Resorts International and sold through Park Mobile is not sold or operated by the Las Vegas Raiders or Allegiant Stadium

Allegiant Stadium is located adjacent to the world-famous Las Vegas Strip, directly west of Interstate-15 between the Russell Rd. and Tropicana Ave. exits. Home of the NFL's Las Vegas Raiders and major events of all kinds, Allegiant Stadium is conveniently located less than three (3) miles from McCarran International Airport and in the proximity of countless Las Vegas resort hotels. The Stadium offers multiple drop-off and pick-up locations and is within walking distance from Las Vegas Blvd.

Here is the parking map for Allegiant Stadium. 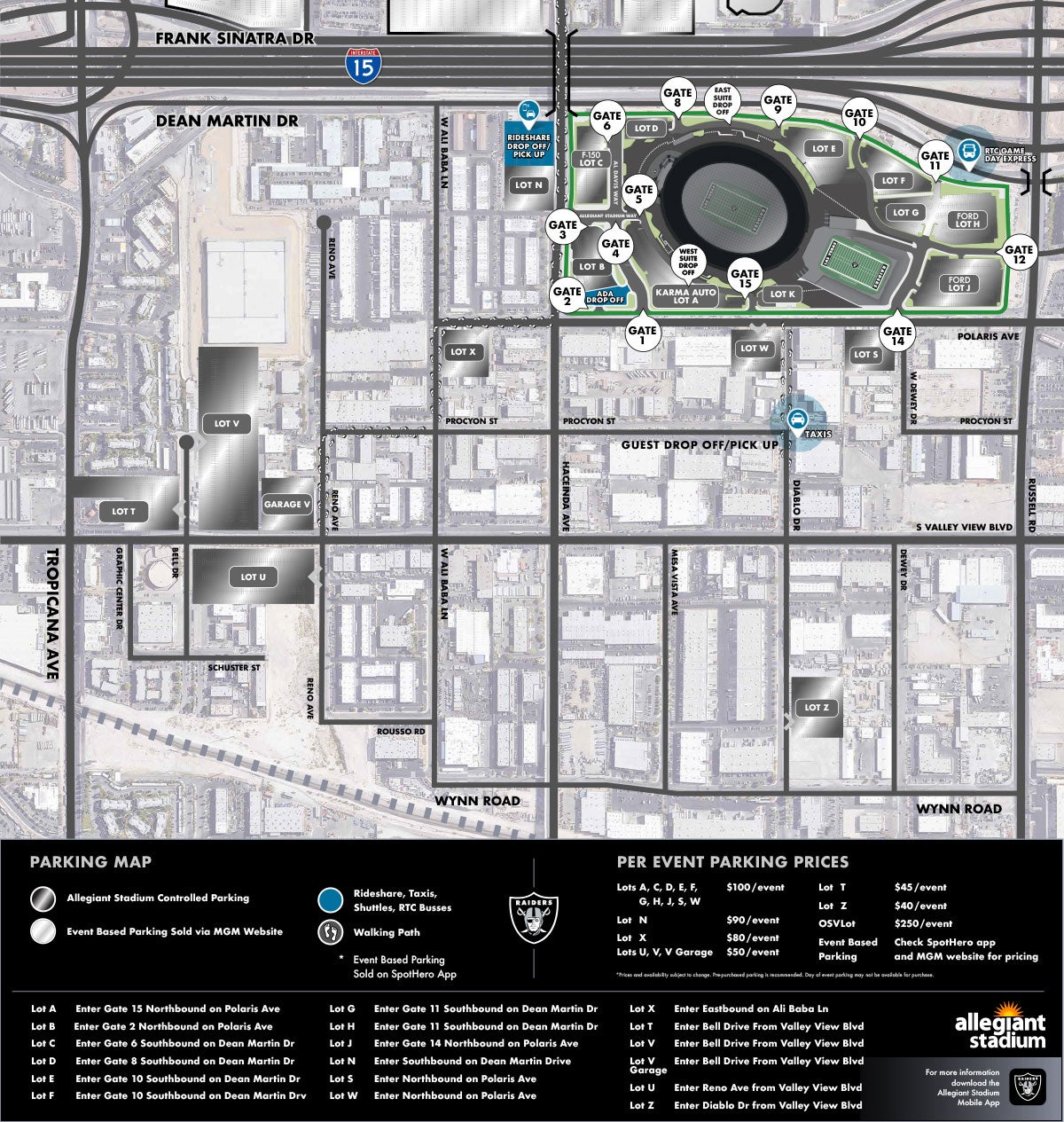 Please visit the Directions to Parking Lots to get information on each parking lot.

There are several options for parking around Allegiant Stadium. Please visit the Parking Map for a detailed map of available parking lots. Parking lots will open approximately four (4) hours before kickoff for Raiders games and approximately three (3) hours before the start of other Allegiant Stadium events. There is no lining up to enter the lots prior to 1 hour before parking gates open. Parking lots will close one (1) hour after the conclusion of the event.

Accessible Parking will be available for guests at Allegiant Stadium. Parking pass holders in need of accessible parking will be directed by traffic and parking staff. A state-issued ADA parking placard, sticker, or license plate does not grant access to parking lots without a verified parking pass.

Guests with disabilities who are utilizing rideshare or who otherwise need to be dropped off and picked up from the Stadium, may utilize the ADA drop-off lot located in Lot B near Gate 2. In the event that a guest requires additional accommodations regarding the ADA drop-off location, please contact our Guest Experience department by emailing guestexperience@raiders.com or by calling 1-800-RAIDERS ext. 7.

The Uber/Rideshare drop-off and pick-up zone is conveniently located within a short walking distance of the Stadium and can be accessed via the front half of Lot N on Dean Martin Drive (5285 Dean Martin Dr). Traffic will be directed southbound on Dean Martin Dr. Allegiant Stadium has also worked with Mandalay Bay and Luxor to provide additional rideshare at their resorts. These resorts can be accessed by walking over the Hacienda Avenue bridge, which will be closed to vehicular traffic before and after large events.

The designated general and taxi drop-off and pick-up zone is located at the corner of Diablo Dr. and Procyon St.. Traffic will be directed eastbound on Diablo Dr. and northbound on Procyon Ave. There will be a walking path through Diablo Dr. leading towards Allegiant Stadium’s southwest entry. If available, a Taxi pick-up line will also be located in this zone after events.

Please note, changes may be made throughout the season. Please view the Parking Map for a detailed map of the designated drop off & pick up locations and rideshare lots.

Pick-up locations for the 2022-23 Raiders and Golden Knights home games include:

Walking From The Strip

Walking to Allegiant Stadium from the Las Vegas Strip is convenient and safe via the Hacienda Bridge. The less than 1-mile path from Las Vegas Boulevard to Allegiant Stadium will be closed to all vehicle traffic and open for pedestrian access only on all game and select event days. The Bridge, itself, is 0.3 miles in length from its east side to the Stadium gate, a short 10- to 15-minute walk. Allegiant Stadium and its partners will be present to manage pedestrian traffic prior to and following events.

Please refer to the One-Way Directional Walking Map for details on the multiple managed walking paths to and from Allegiant Stadium. 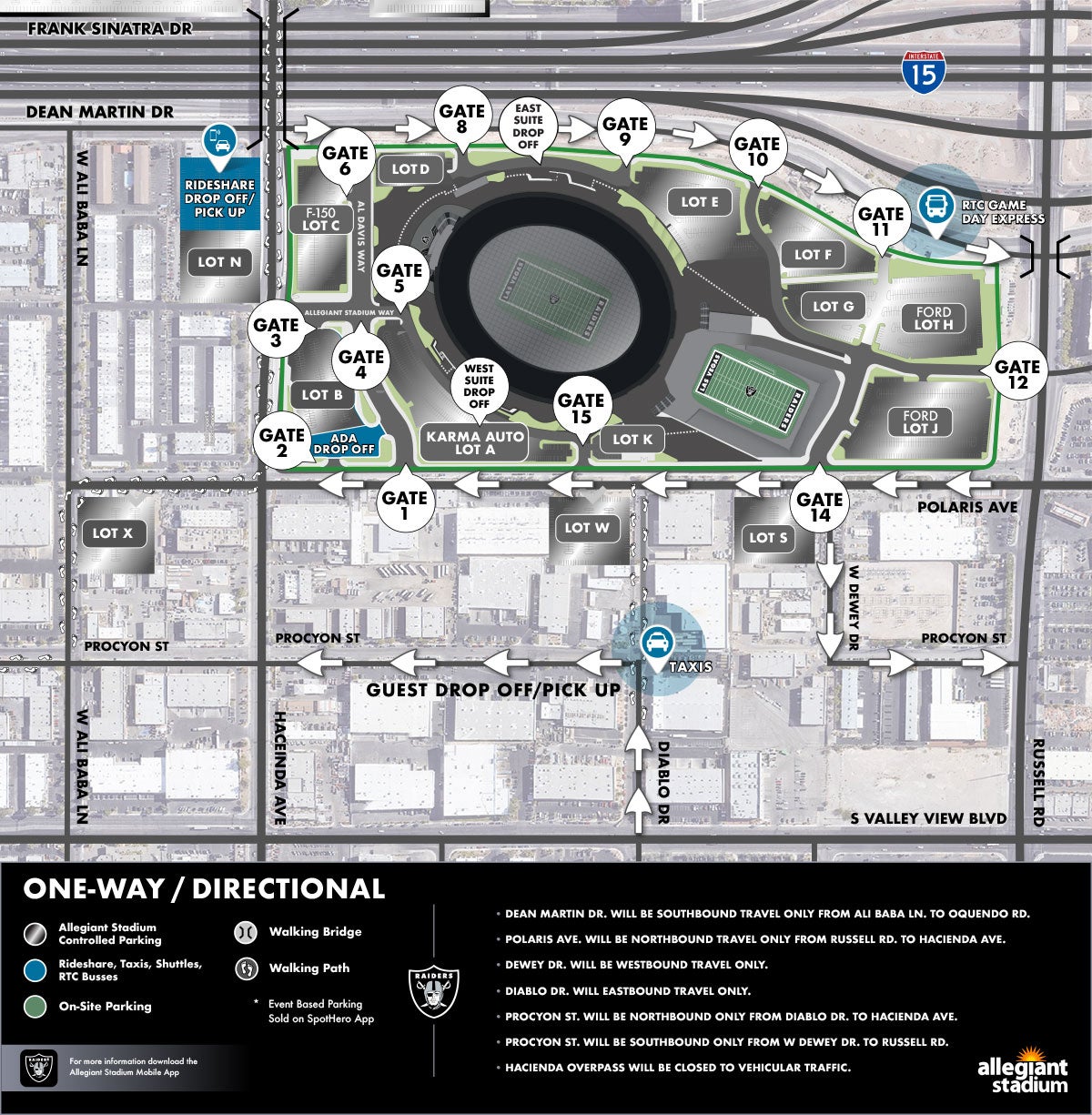 On non-event days, complimentary parking will be available for Raider Image guests in Lot A. Please visit The Raider Image website for store hours.

Is tailgating allowed before games?

Yes, tailgating is allowed at approximately 6,000 parking spaces throughout  multiple lots.  Please check the parking lot details before purchasing your parking pass to understand if tailgating will be permitted. It is expected that nearby resorts may also offer tailgating activations. There is no lining up to enter the lots prior to 1 hour before parking gates open.

You will be directed into the next available parking space upon entering the lot. Please keep in mind if you would like to tailgate next to another party, you will need to line up and enter the lot at the same time.