LAS VEGAS (Friday, June 10, 2022) – AEG, the world’s leading sports and live entertainment company, announced today the launch and schedule for its inaugural Soccer Champions Tour, a new marquee, global soccer event including two matches at Allegiant Stadium in Las Vegas taking place on Friday, July 22 and Saturday, July 23. The new event features five of the world’s most iconic soccer clubs competing in top-tier matches in the span of only nine days across the western United States.

Participating clubs for the Las Vegas events include current La Liga and UEFA Champions League winner Real Madrid CF, La Liga powerhouse FC Barcelona, Serie A’s Juventus, and Club Deportivo Guadalajara. This tour marks the first return of play in the U.S. for Barcelona and Real Madrid since 2019 and for Juventus since 2018.

“AEG is excited to launch this unparalleled soccer tour as five of the most exceptional soccer clubs in the world return to the United States this summer,” said Tom Braun, AEG Senior Vice President of Soccer & Business Operations and Business Development. “Following several years without seeing some of these teams in the United States, we are thrilled to provide the opportunity for soccer fans in the U.S. to once again watch their favorite European and Mexican clubs play in person.”

Exclusive pre-sale tickets will be available starting Wednesday, June 15, with the general on-sale ticket access beginning on Friday, June 17. For access to the pre-sale, all fans are invited to sign up at AllegiantStadium.com/JuventusvsChivas and AllegiantStadium.com/RealMadridvsBarcelona. All individual game and venue-specific information is also available at SoccerChampionsTour.com. AEG Global Partnerships is also currently selling sponsorship for the Soccer Champions Tour and individual matches.

Real Madrid, founded in 1902 and named by FIFA ‘Best Club of the 20th Century’, this season has won La Liga (35) and the Spanish Super Cup (12) under the direction of Carlo Ancelotti.  With stars like Karim Benzema, Luka Modrić, Thibaut Courtois, Vinicius Júnior, Toni Kroos, Casemiro and Dani Carvajal, among others, Real Madrid has just been proclaimed winner of the Champions League for the fourteenth time, the club with more wins in the most important European competition.

FC Barcelona, founded in 1899 and colloquially known as Barça, competes in La Liga and is one of the most successful European clubs in history. The club maintains a philosophy deeply rooted in its local Catalan identity and is owned by more than 137,000 members. Due to its very special personality, FC Barcelona is recognized as being ‘more than a club’. The team’s distinctive style of play is projected around the world by the best players and coaches in combination with club’s famous reliance on homegrown talent. The club has won 72 major domestic titles, including 26 La Liga titles and 31 Copa Del Rey titles, as well as five Champions League titles and three FIFA Club World Cup. Barcelona is led by manager and club legend Xavi Hernández and has a roster of international talent including Spaniard midfielder Pedri, Dutch forward Memphis Depay and club veteran Sergio Busquets.

Founded in 1897 in Turin, Italy, Juventus is one of Italy’s oldest and most decorated soccer teams with more Italian league championships than any other team. Also known as Juve, the club competes in the Serie A, the top tier of the Italian soccer leagues, and is the first European club to win all three major UEFA competitions. The club’s current roster includes Italian defender Leonardo Bonucci, American midfielder Weston McKennie, Colombian defender Juan Cuadrado and Serbian forward Dusan Vlahovic.

Additional details about the event, including media accreditation for the Soccer Champions Tour, will be announced at a later date. 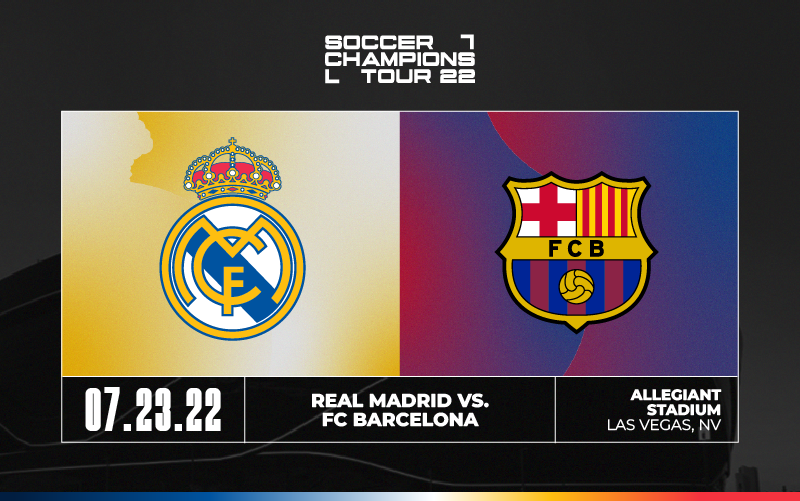 Global soccer giants Real Madrid and FC Barcelona set to face off at Allegiant Stadium on 7/23!