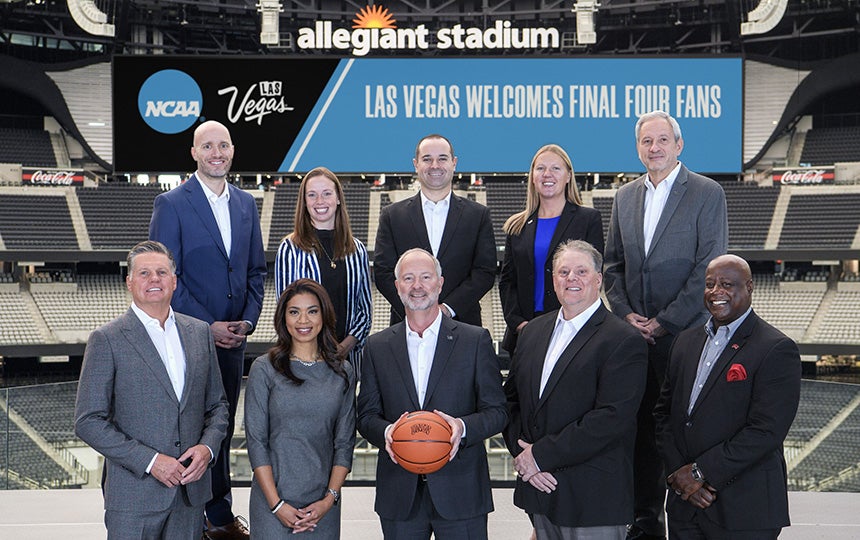 The NCAA Division I Men’s Basketball Committee selected four sites to host the 2027-2030 Men’s Final Fours, mixing in a city that by the end of the decade will have tied the record for most Men’s Final Fours hosted in the history of the event with three other metro areas that combined have hosted just a trio of them.

“We are excited to bring the NCAA’s premier championship to Las Vegas, a city that for a number of years has hosted numerous championships from several member conferences,” said Chris Reynolds, athletics director at Bradley and the chair of the committee. “The feedback from leagues, the fans of their teams and the media covering the events staged there has been overwhelmingly positive, and we are confident we’ll get the same reviews when the Men’s Final Four is played at Allegiant Stadium.”

Before going to Las Vegas, the Men’s Final Four will return to Detroit in 2027. Ford Field was the site of the 2009 event, including a national championship played in front of 72,922 fans, which ranks fifth all-time. Ford Field, which was the first venue to use the in-the-round seating configuration for the Men’s Final Four, also holds the attendance record for most fans at a regional semifinal session (57,028) and regional championship game (57,563). Detroit will also host the Midwest Regional in 2024, which will mark the ninth time the city and the surrounding area (Auburn Hills, Pontiac) will have hosted a preliminary round of the tournament.

Another building set to stage its second Men’s Final Four is AT&T Stadium in Arlington in North Texas, which held the event in 2014 and was selected to host in 2030. It will be the third Men’s Final Four in the region; Dallas hosted it in 1986. AT&T Stadium owns a clean sweep of Final Four attendance records, having drawn 79,444 fans to the national semifinals, and 79,238 more to the championship game, for a two-session total of 158,682. The region is no stranger to hosting March Madness. Arlington, Dallas, Denton and Fort Worth have hosted men’s preliminary rounds on 20 different occasions and Dallas is set to host the 2023 Women’s Final Four and the 2024 men’s South Regional as well.

“We were really impressed with how the presenters from Detroit and North Texas rebounded from the disappointment of not being awarded a Final Four in the previous cycle and put their best foot forward during this entire process,” Reynolds said. “These communities should be proud of the leadership displayed by everyone involved with making these bids and ultimately earning the privilege to host an event of this magnitude. Both will be great locations at which to play the Final Four.”

The first Men’s Final Four was conducted in 1939, and the 90th will be held at Lucas Oil Stadium in Indianapolis in 2029. That will mark the 10th time a team has hoisted the national championship trophy in the city, tying the record currently held by Kansas City. Indianapolis first hosted the Final Four in 1980, then did it again in 1991. But in the past 25 years, the city has hosted six more times (1997, 2000, 2006, 2010, 2015 and 2021), and was previously selected to host in 2026 as well. Indianapolis’s history of hosting the tournament dates to 1940 and preliminary rounds of the championship have been played in the city on 18 occasions, including eight times this century. The city is also scheduled to host first- and second-round games in 2024 and the Midwest Regional in 2025.

“It’s been said many times about how coaches, players, fans and media love coming to the Final Four in Indianapolis, but I don’t think you can overstate just how much everyone enjoys their experience when they go there,” Reynolds said. “The people not only embrace major events, but they don’t take a single thing for granted. Every time this event is up for bid, anyone involved with the process approaches it with incredible energy and with an urgency that demonstrates the community’s desire to serve as a regular Final Four host.”

The committee previously awarded the 2023 Men’s Final Four to Houston, while Phoenix will serve as host in 2024 and San Antonio will stage the event in 2025.

Sign up to receive more information on the NCAA Men's Final Four as it becomes available.