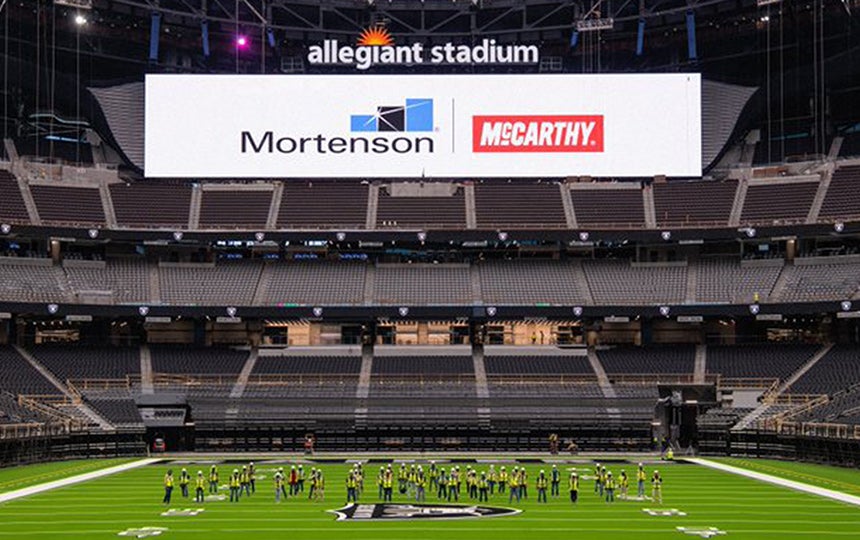 LAS VEGAS – (July 31, 2020) – The Mortenson | McCarthy joint venture received a Certificate of Occupancy on Allegiant Stadium, the new home of the NFL’s Las Vegas Raiders and notably the largest entertainment venue in Las Vegas. The joint venture team wrapped up the $1.97 billion facility on July 30, marking the end of a successful 31-month-long construction schedule, a mere 40 months after the NFL’s approval of the Raiders’ move to Las Vegas. With this milestone reached, Allegiant Stadium’s operations team will move into their new facility to begin preparations for the venue’s first event.

The 1.8 million-square-foot stadium will also host UNLV Football and a variety of other sporting and non-sporting events. The facility features 65,000 seats, a retractable natural turf field, large operable walls that open to spectacular views of the Las Vegas Strip, a translucent roof, and a variety of premium spaces throughout all levels.

Visually inspired by the sleek and gradual curves of a futuristic luxury vehicle, Allegiant Stadium is unlike any other venue, making it an architectural and engineering marvel. The unique features of the domed stadium include the cable net truss system used for the roof. The seven-acre ETFE roof is suspended by 100 stainless steel cables that create the light-weight roof structure diaphragm.

Meeting the challenge to provide the Raiders with a real grass field in the desert, the building also features a retractable field system. Weighing nearly 20 million pounds, the playing field is housed in a movable “tray” and moves on 540 electrically-powered wheels, which allows the natural grass field to move outdoors for sunlight and water. This feature provides the stadium with both natural grass or turf playing surfaces. Allegiant Stadium also features a striking memorial, the Al Davis Memorial Torch, which is among the largest 3D-printed structures in the world and honors the legacy of the former principal owner, general manager and head coach of the Raiders.

“Football fans and the community of Las Vegas will really enjoy the design and unique elements of this stadium,” stated Eric Grenz, Mortenson | McCarthy Vice President of Operations. “Allegiant Stadium is second-to-none and sets a new benchmark for sports and entertainment facilities. We’re thrilled to reach this important milestone and look forward to seeing the stadium come to life when it opens.”

Design-Build delivery was instrumental to the project’s success and technology drove enhanced decision-making at all facets of the project, ultimately reducing the time and cost of construction.

Mortenson | McCarthy made worker safety a priority throughout construction and in doing so achieved a remarkable safety record with a total recordable incident rate (TRIR) of 0.98, which is less than one-third the national average. More than 12,000 individuals contributed to the project’s design and construction.

Workforce and business inclusion were at the forefront of building Allegiant Stadium. The project exceeded all small and diverse business goals, with 23% awarded to small businesses and 62% of the workforce being minority and female.

From the procurement process to training opportunities and student tours exciting the next generation of builders, efforts were focused on the Las Vegas local community. 70% of all firms involved on the project were Nevada-based companies. More than six million labor hours went in to constructing the project and an estimated 6,000 recurring jobs will be sustained or created to maintain venue operations.

“To see first-hand the impact this project has had on every worker, business, intern and visitor has been extremely humbling,” said Mortenson | McCarthy Project Executive Paul Dudzinski. “This team has accomplished something incredible together, and we are proud to be able to share this amazing destination with our neighbors and community.”

Mortenson is a U.S.-based, top-20 builder, developer, and engineering services provider serving the commercial, institutional, and energy sectors. Mortenson’s expanding portfolio of integrated services helps its customers move their strategies forward, ensuring their investments result in high-performing assets. The result is a turnkey partner, fully invested in the business success of its customers.

McCarthy Building Companies, Inc. is the oldest privately held national construction company in the country – with more than 150 years spent collaborating with partners to solve complex building challenges on behalf of its clients. With an unrelenting focus on safety and a comprehensive quality program that span all phases of every project, McCarthy utilizes industry-leading design phase and construction techniques combined with value-add technology to maximize outcomes. Repeatedly honored as a Best Place to Work, McCarthy has been operating in Nevada since 1973. McCarthy is 100 percent employee owned. For additional information, visit www.mccarthy.com.